by The Venerable Showers of Beauty Gamelan 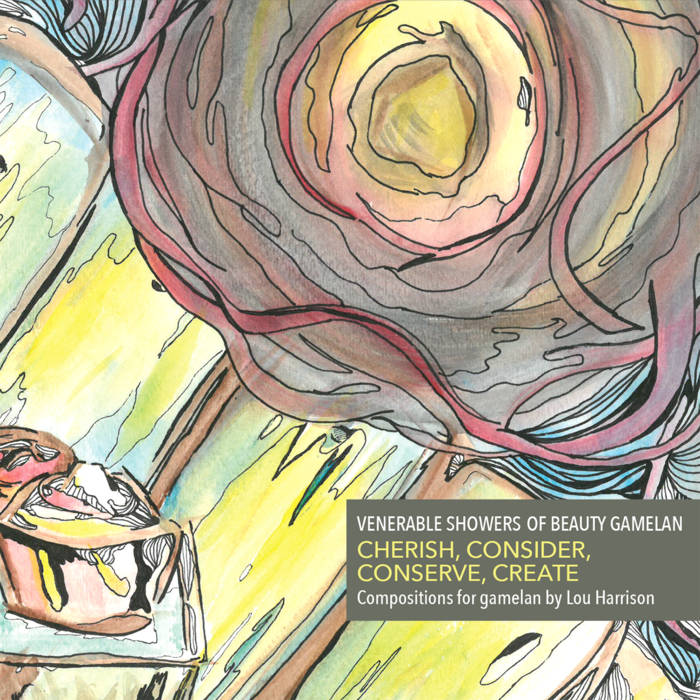 Venerable Showers of Beauty Gamelan ensemble (Kyai Guntur Sari) presents compositions by Lou Harrison (1917-2003) that stretch from his charming early efforts in the mid 1970s to one of his final gamelan compositions.

At the height of Lou Harrison’s career as one of America’s most innovative composers, when he was regularly commissioned by some of the world’s most prestigious orchestras and classical musicians, the ensemble he most loved to write for was the radiant ensemble of gongs, metallophones, and other instruments from Java, Indonesia, called gamelan. Yet this side of Harrison’s career is more heard about than heard, as most of his innovative and alluring music for gamelan ensemble has never been recorded. Now, in celebration of the 2017 centennial of Harrison’s birth in Portland, Oregon, the city’s Gamelan Kyai Guntur Sari (translated to “Venerable Showers of Beauty Gamelan”), with which he worked from its inception, presents seven of his previously unrecorded gamelan compositions.

Lou Harrison’s exposure to Asian art began in his childhood Portland home, which was crowded with his mother’s varied collection. During his teenage years in San Francisco he explored Chinese opera, and he used instruments bought in Chinatown shops in the percussion concerts he created with fellow West Coast music pioneer John Cage in the 1930s and ‘40s. He first experienced an Indonesian gamelan ensemble at San Francisco’s 1939 Golden Gate International Exposition. The entrancing sound stayed with him; his impressions of the music pervade the Suite for Violin, Piano and Small Orchestra, written in 1951 toward the end of a decade spent living in New York City. While it didn’t use gamelan instruments, the suite’s sonorities and some performance techniques imitated gamelan, as would many later compositions. In 1949-50, Harrison composed at Portland’s Reed College before moving back to California’s central coast in 1953, where he lived for the rest of his life.

During the 1960s Harrison studied in Korea and Taiwan, returning with fusions of these traditions and Western music, but his greatest affection remained with the gamelan traditions of Java. An opportunity to immerse himself in gamelan came with the residency of one of Java’s master musicians, K.R.T. Wasitodiningrat (known familiarly as Pak Cokro), at Berkeley’s Center for World Music in the 1970s. Harrison and his life partner Bill Colvig built their own gamelan, and with Pak Cokro’s encouragement, Harrison began composing a diverse repertory of gamelan music that by the time of his death in 2003 included dozens of compositions.

The Venerable Showers of Beauty (VSB) Gamelan is a group of Lewis & Clark College students, alumni and community members, based in Portland, Oregon, specializing in the performing arts of Java. Founded in 1980, the VSB Gamelan has performed throughout the Northwest at hundreds of events. Mindy Johnston is the current director. ... more

Bandcamp Daily  your guide to the world of Bandcamp

Interviews With Butcher Brown and Slauson Malone, plus LP of the week by SAULT.